Facebook: Should your voice be defined by your bank balance? 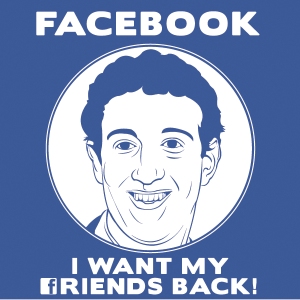 “That page I liked doesn’t seem to post as much as it used to”?

Turns out, you’re not the only one. Over the last couple of years Facebook has been slowly tinkering with the algorithms that serve content up to us on a regular basis. Facebook is making big decisions about what you see, why you see it and who you see it from and now we’re really starting to see the impact.

Why has it changed so much recently?

One thing often out of our minds is that Facebook is a business. Particularly since Facebook floated on the stock market earlier this year there has been an increasing pressure on the company to refine its business model. Basically, despite the social network being wildly popular across the world it hasn’t been that great at making money.

To address this, the company is taking tighter control of what you see and changing the terms of the information economy. In the early days of Facebook you would have seen a straightforward chronological timeline of your friends posts and pages. Facebook was a level playing field – each voice was just as influential as the next. Individuals, organisations and brands (big or small) with a powerful message could get it out quickly, easily and free, but now Facebook wants you to pay and the impact has been major.

As Richard Metzger put in his Dangerous Minds post:

Spring of 2012 was when bloggers, non-profits, indie bands, George Takei, community theaters, photographers, caterers, artists, mega-churches, high schools, tee-shirt vendors, campus coffee shops, art galleries, museums, charities, food trucks, and a near infinite variety of organizations; individuals from all walks of life; and businesses, both large and small, began to detect—for it was almost imperceptible at first—that the volume was getting turned down on their Facebook reach. Each post was now being seen only by a fraction of their total “fans” who would previously have seen them.

Facebook has “turned down the volume” to boost the value of its “sponsored stories” – a feature which allows individuals and advertisers to make sure that their posts are seen by more people by paying Facebook for a greater reach.

This is great for the businesses and organisations who can afford it, but what about the bloggers, the non profits, the small business owners, the charities and the like who have relied on Facebook for years to interact with their audiences, their customers and their communities? Without the cash, their volume is now permanently turned down.

Facebook, in its most powerful period, was the great equaliser. Whether it intended to or not, it gave an important platform to underrepresented voices in our community –  it democratised an information platform in a way we’d never seen before. Now, however – it feels like a case of history repeating. Like the print and broadcast organisations that have defined the last century of communication before them Facebook is now giving the power and influence of the information economy predominantly to those who can afford it.

I get that Facebook needs to make money – I do – but I find it extremely disappointing that it has chosen to do so in a way that disempowers the wide range of important  and underrepresented voices it previously empowered. It saddens me that a platform that once treated us equally has now defaulted back to the information economy of defining the value of your voice by your financial value.

I hope this business model fails and that either Facebook sees the error of its ways or a competitor can rise up and give us an alternative that respects our voice as a community. You can join Dangerous Minds in telling Facebook “I Want My Friends Back” – Let’s tell Facebook that we’re worth more than this.

Jonathan is the Creative Director of We Matter Media. You can follow him @JB_AU

← Needing more from our media
2 months of self imposed sobriety →